Archaeological excavations at the site of 32Smith (the study site) were conducted between 2018 and 2020. The archaeology uncovered early huts, occupied between c. 1792-1822, mid-late 19th century cottages, late 19th century industry, evidence of Aboriginal habitation c30,000bp to 1820s as well as the natural landscapes as modified by both Indigenous and European cultivation and development. 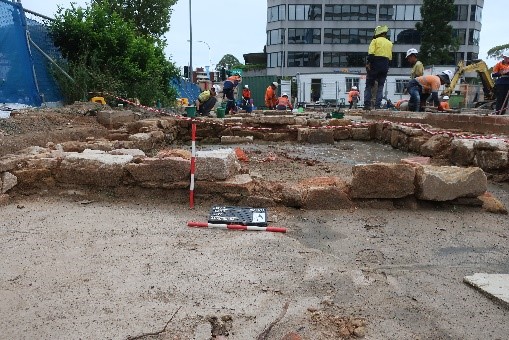 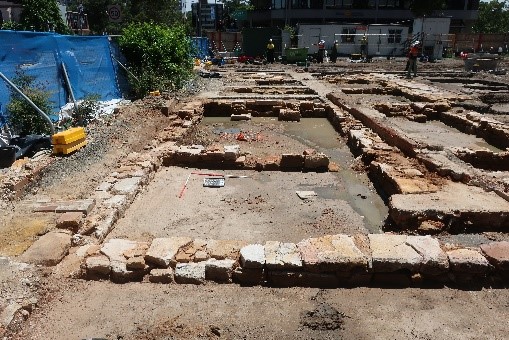 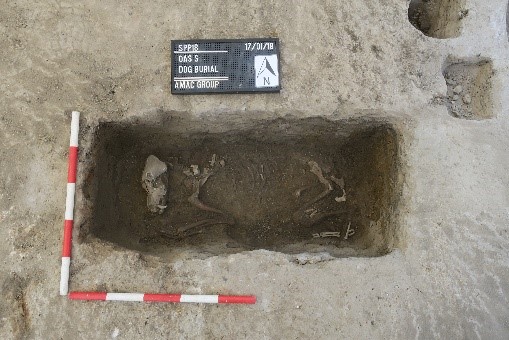 The extract of the analysis and conclusions provided here were drawn by specialists Martin Carney, Ivana Vetta, Benjamin Streat, Mike Macphail and Peter Mitchell with a full report available on the works by AMAC which can be downloaded here:

The best preserved convict period hut located is also thought to be the earliest building on the former Salvation Army site. The building was constructed before 1804 and was possibly standing (in one form or another) until the 1850s.

Smith or Phillip Street did not exist in 1790 or 1792. Smith Street first appearing, unnamed in a plan of c1804, and Phillip Street in the plan of 1814. The study site during this time was occupied by a single building.

A building is shown in a similar location as the 1804 structure in an 1822 map, however the area is vacant on plans dated 1823 and 1836. We do not know what these structures may have been used for, or who occupied them.

Archaeological investigation revealed that the original hut was at least a single room dwelling possibly with a veranda addition which may have originally faced the river at some point. It was constructed using a system of trenches into which the wall posts were placed. The hut was constructed on a hillock, overlooking Smith Street to the west. A large tree apparently separated the Hut from Smith Street and appears to have been removed after the construction of the dwelling as evidenced by the tree bole which contained mid-19th century artefacts. The hut was later extended east, and possibly the north creating four separate rooms. 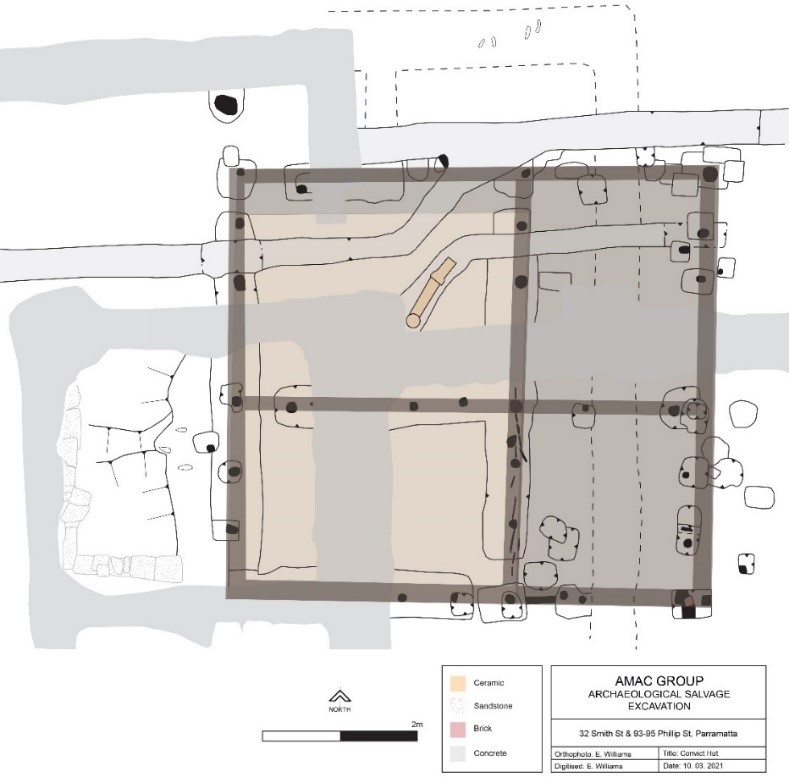 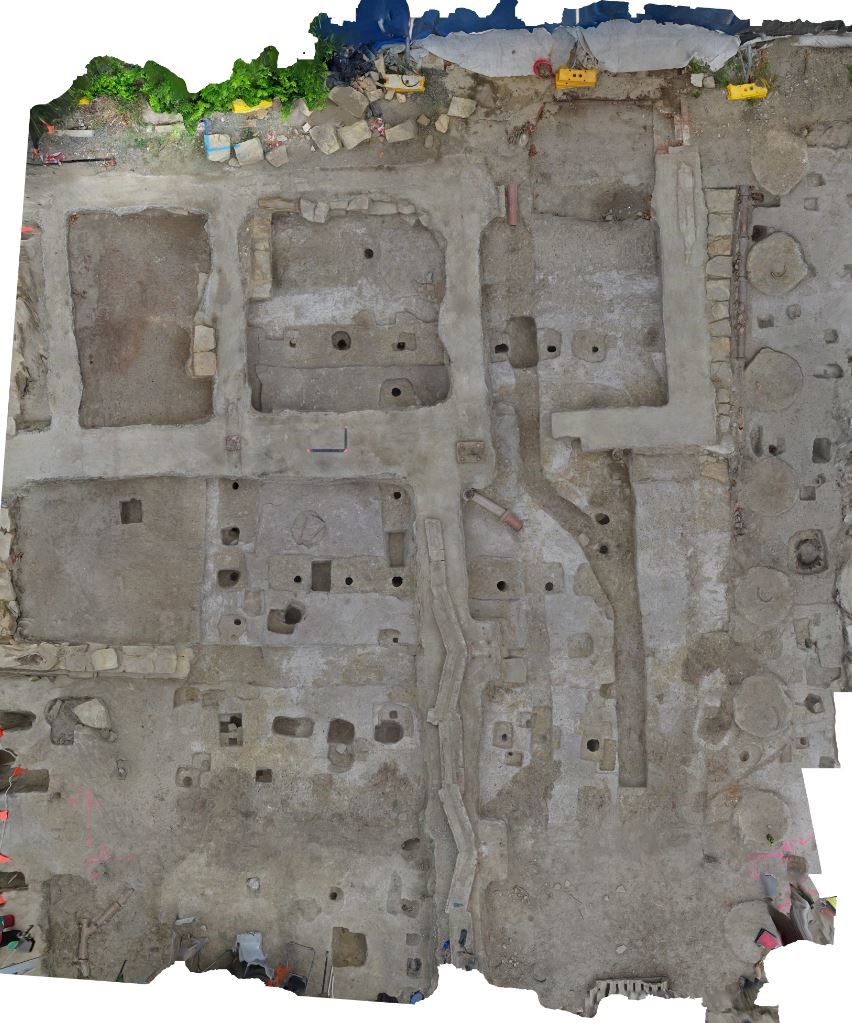 As seen in the above images: Image A is a representation of hut layout with extension. Image B details the convict hut archaeological excavation.

Fragments of a up to six unglazed clay bowls and vessels were uncovered. These were in white or salmon coloured clay and are associated with the earliest phases of potting in NSW between 1790 and c1800. A range of other early lead glazed wares (nearly five hundred fragments in all), including those made at the Moreton, Leak and /or Balls pottery dated usually c1800-1830. Of specific interest is a single lid, made for either a child’s toy or a perhaps small sugar pot, but in either case a specially made item from the Ball pottery (pre 1823). 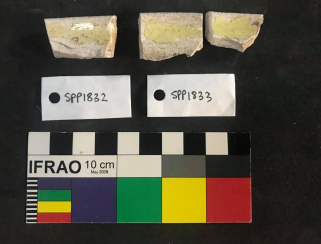 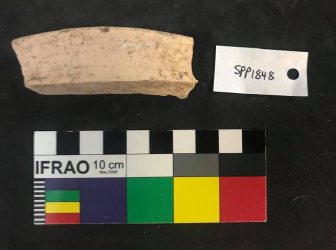 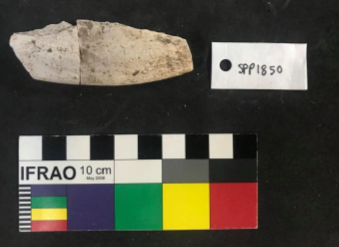 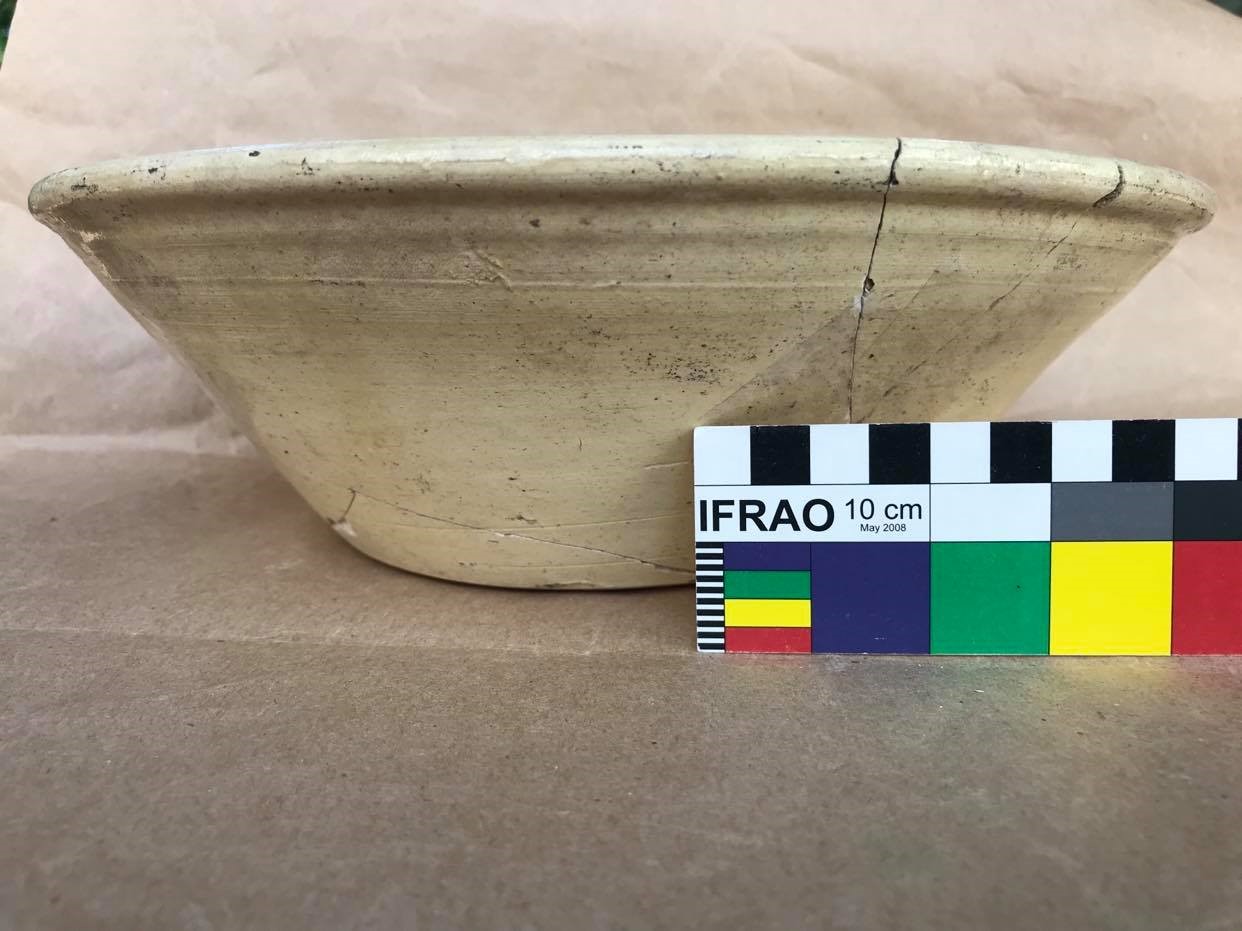 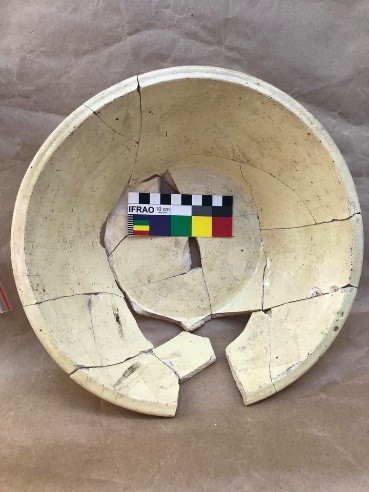 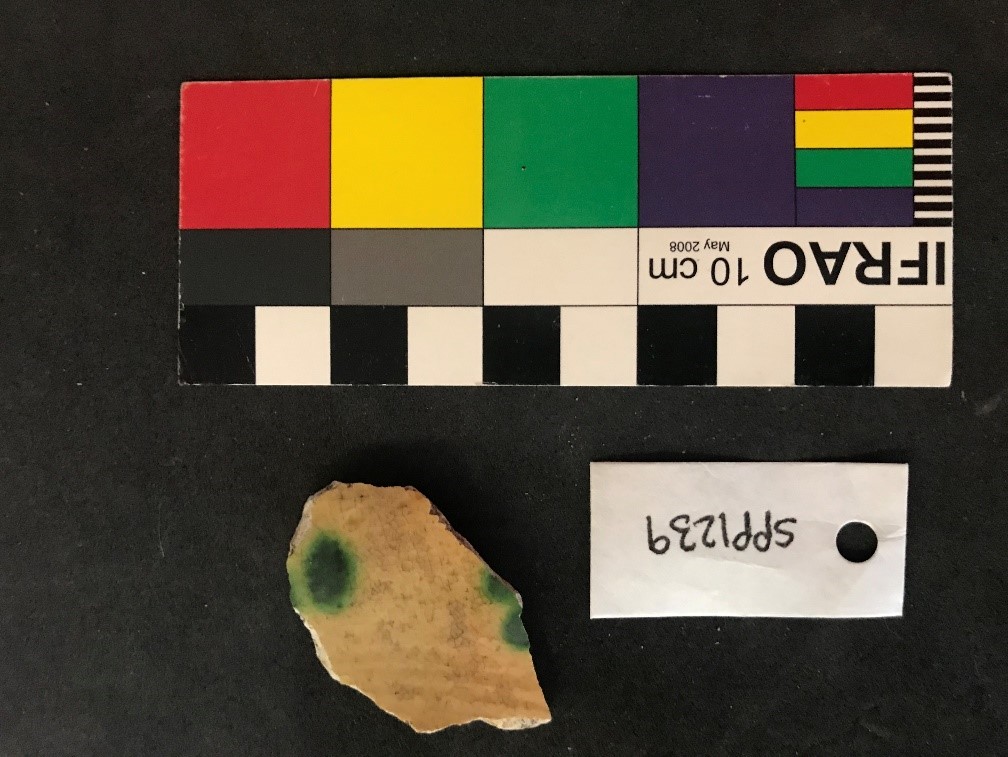 As seen in the images above - Lead Glazed Bowl and Fragment of Thomas Ball’s pottery ware (YAS – rear of building 13-14).

This same area also yielded a single button formerly belonging to the coat of a soldier from the 22nd ‘’Cheshire’’ Regiment. The button manufactured by James McGowan of London (post 1801) is stylistically dated to the period 1801-1810s, yet this regiment never served in Australia, and its owner is yet to be traced. Interestingly an identical button was found in another convict town - Port Macquarie. 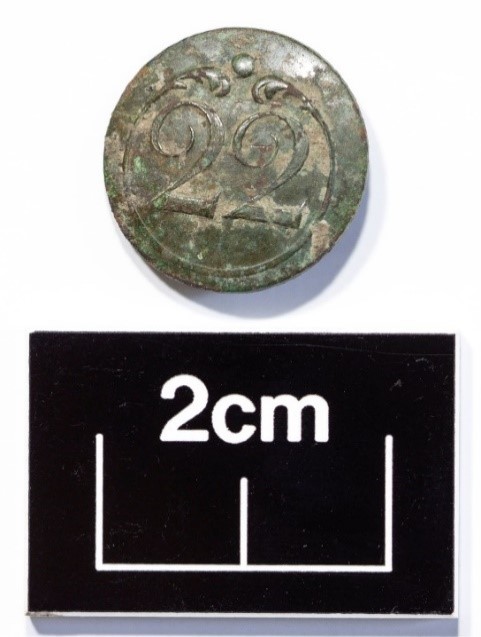 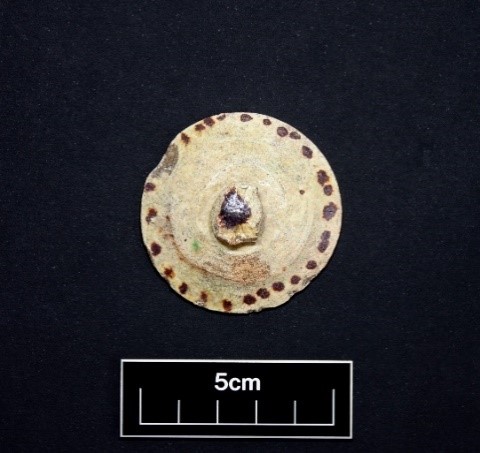 Rather than the typical convict gang, the occupants of this hut might have been a family considered to be, as Tench described, “of good character”, or perhaps a convict appointed as a superintendent or overseer.

Palynology is the study of plant pollen, spores and certain microscopic plankton organisms (collectively termed palynomorphs) in both living and fossil form.

The following summary, by Mike Macphail (ANU), provides an overview of the samples found within the study site against the broader Parramatta context.

Geomorphologist Peter Mitchell indicated that subsequent developments have largely reshaped this landscape. The soil profile inspected is dissimilar to sites in Parramatta dating to around 50,000 BP and is likely either the bed of the watercourse, ox bow lake or a billabong of back swamp, associated with a former course of the Parramatta River, or more likely a tributary with a levee bank located along the southern edge of the study area.

All samples preserved large numbers of mostly carbonized xylem (burnt wood) fragments and much larger numbers of small carbon particles from deliberately- or naturally occurring fires. Some samples, found within the convict period hut, are sub angular, hinting at water-transport. One area was found to be unique in that it also preserves low numbers of cereal (Cerealia) pollen. These pollen almost certainly represent early grain crops being grown on the Site or adjacent allotments on the Pleistocene river terraces in the late 18th or early 19th century. 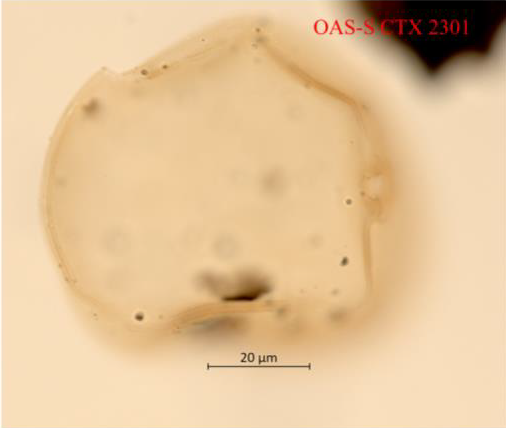 As seen in the image above: Cereal Pollen Grain recovered from redeposited from A1 soil horizon in area OAS-S

A single pollen grain of the melon genus Cucumis found in situ in a small agricultural plot (in a ‘hoe mark’) just outside the convict period hut is evidence for a vegetable garden on the Site. Several samples yielded trace to low numbers of Mediaverrunites, a distinctive fungal spore, that when present in large amounts on Colonial and Aboriginal archaeological sites in Sydney and Parramatta, appears to be associated with oil or fat. For the same reason, the spore, from the former billabong/hollow, potentially represents cooking of fat-rich game during the 18th or early 19th centuries, or kitchen waste in the later 19th and 20th centuries.

Land was cleared and crops planted rapidly as Parramatta was settled. The evidence for cultivation on the study site consisted only of small private allotments or house gardens scale. Small beds were identified by hoe marks from several phases along the Smith Street frontage, however a lack of repeat hoes marks, or any large area or density indicates a short or single term usage of the land and possibly failure of the attempted cultivation.

Watkin Tench (1793) records vines such as grapes (Vitis), melons (Cucurbita), cucumbers (Cucumis), and pumpkins (Cucurbita), and fruit trees including apples (Malus), bananas (Musa), oranges and lemons (Citrus), and figs (Ficus) were growing in the vice-regal garden at the foot of Rose Hill in 1791.

Any exotic melons would have arrived in the 1st fleet, as either private stock or possibly collected from South Africa where the largest variety grow, as they are not listed in the inventory as seed or plant in First Fleet. 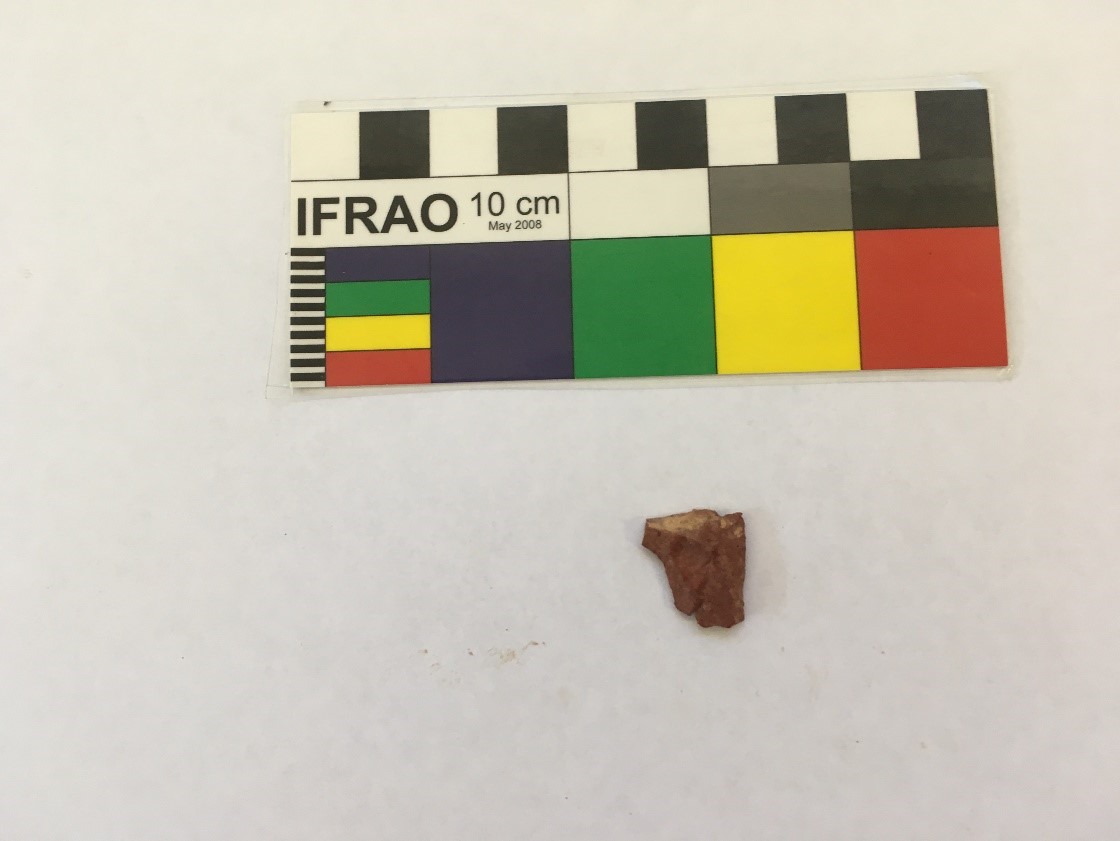 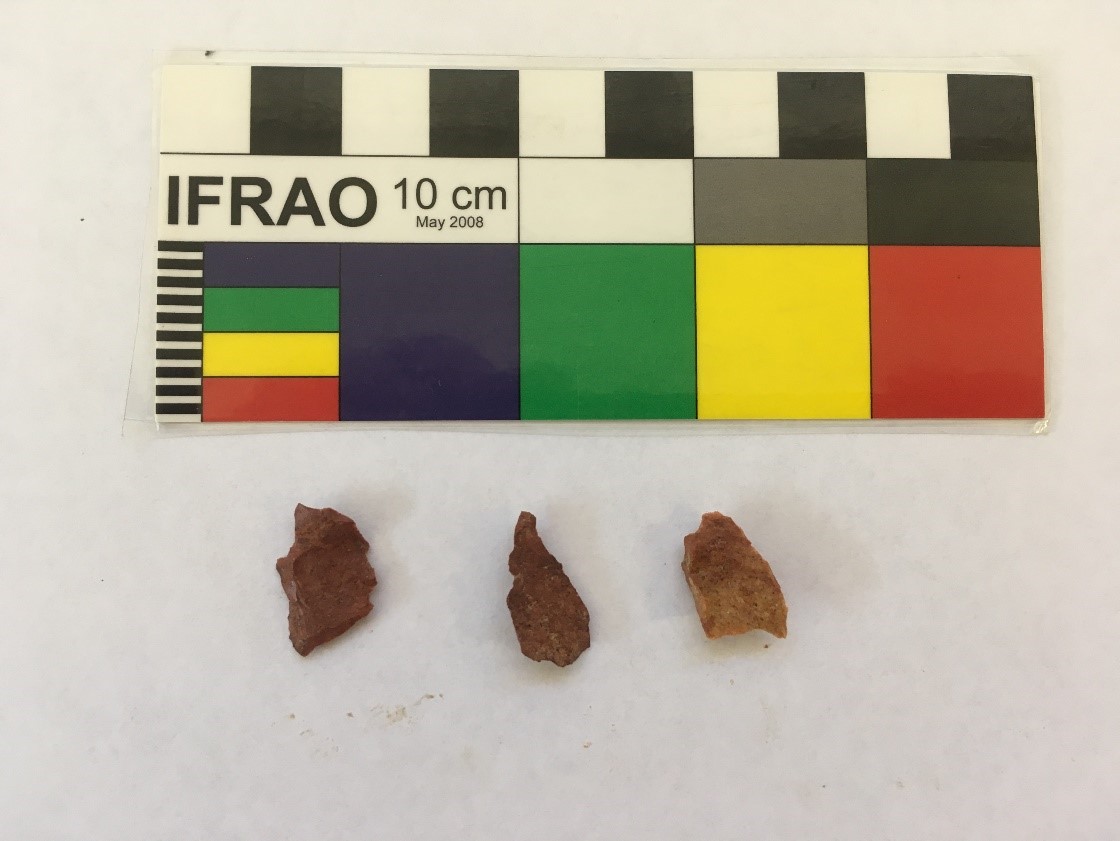 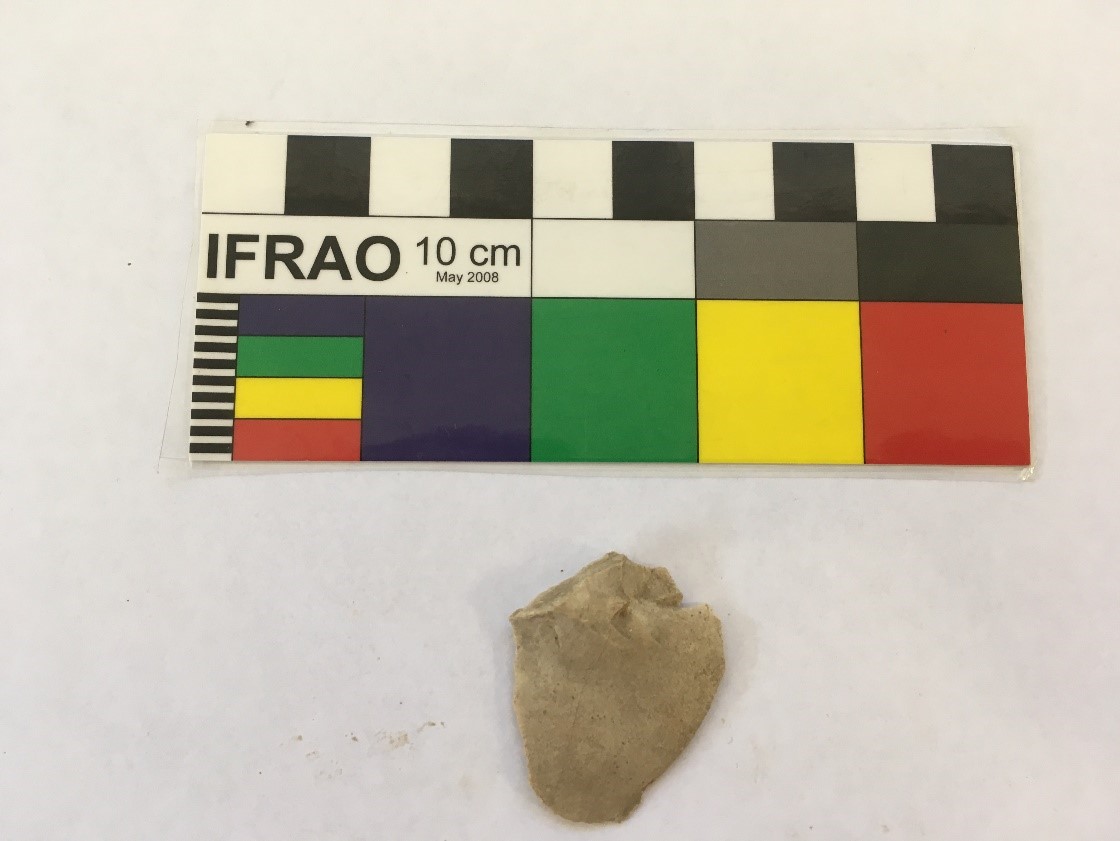 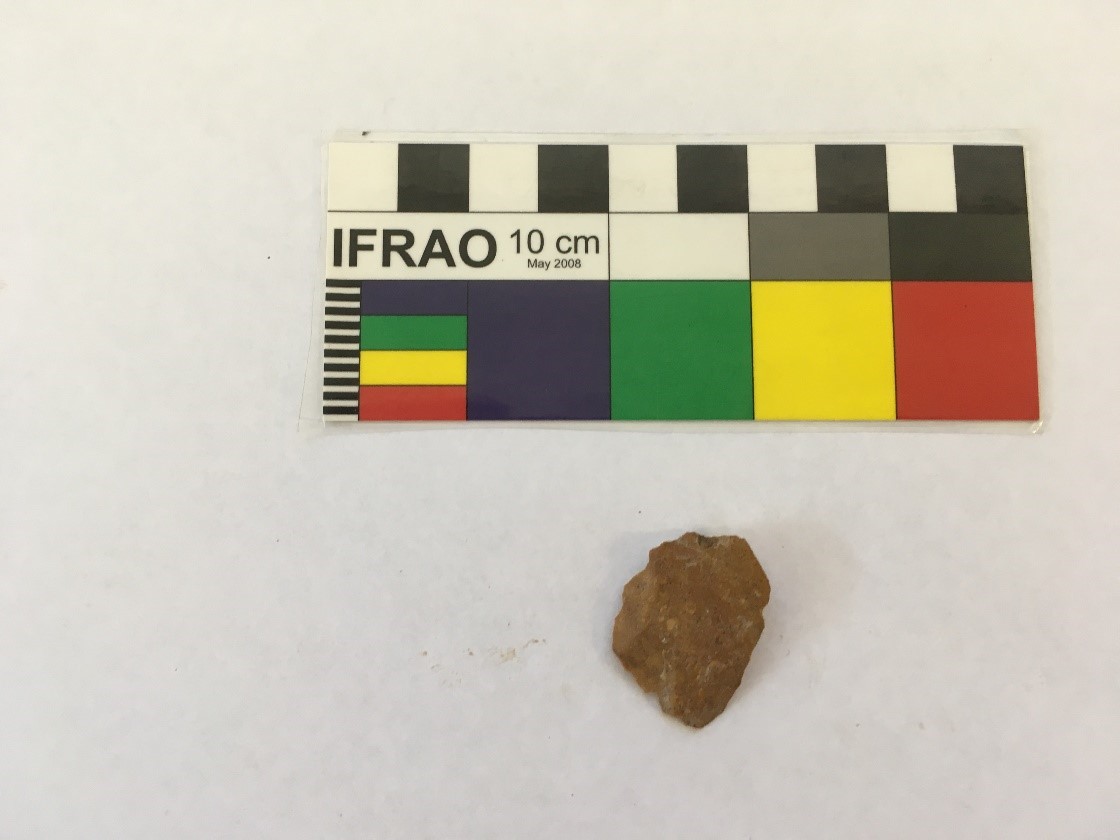 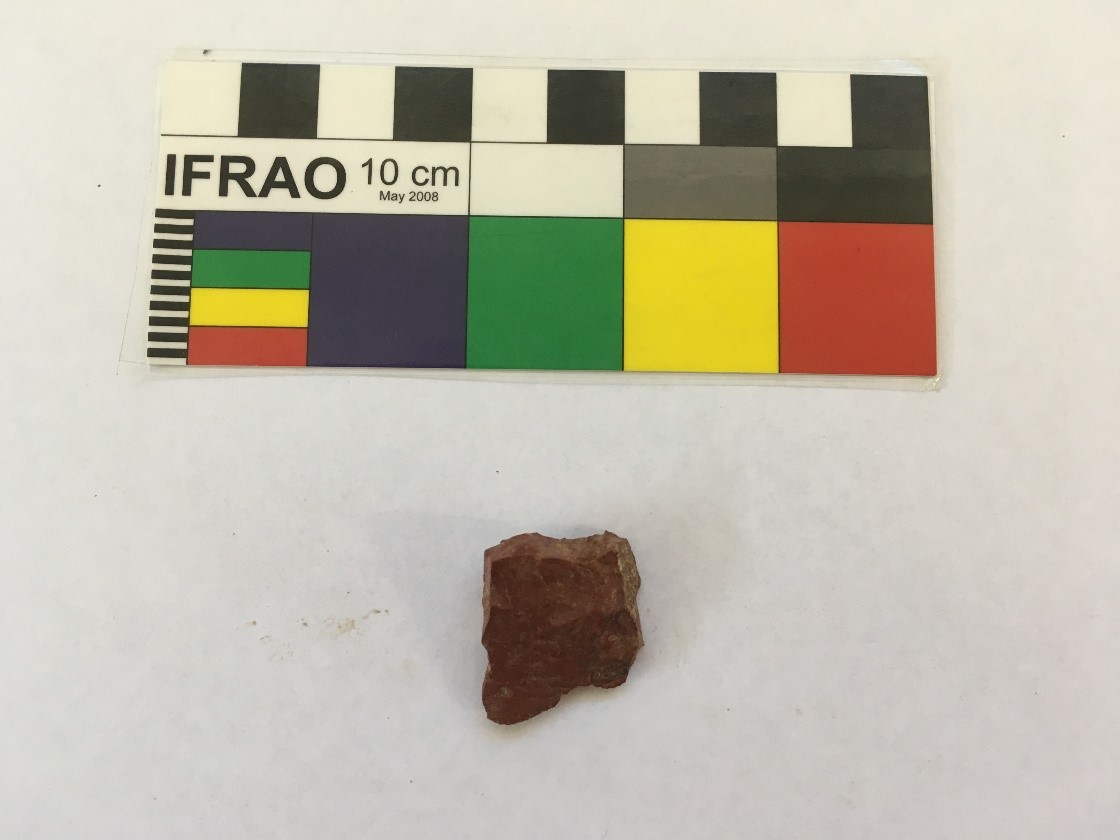 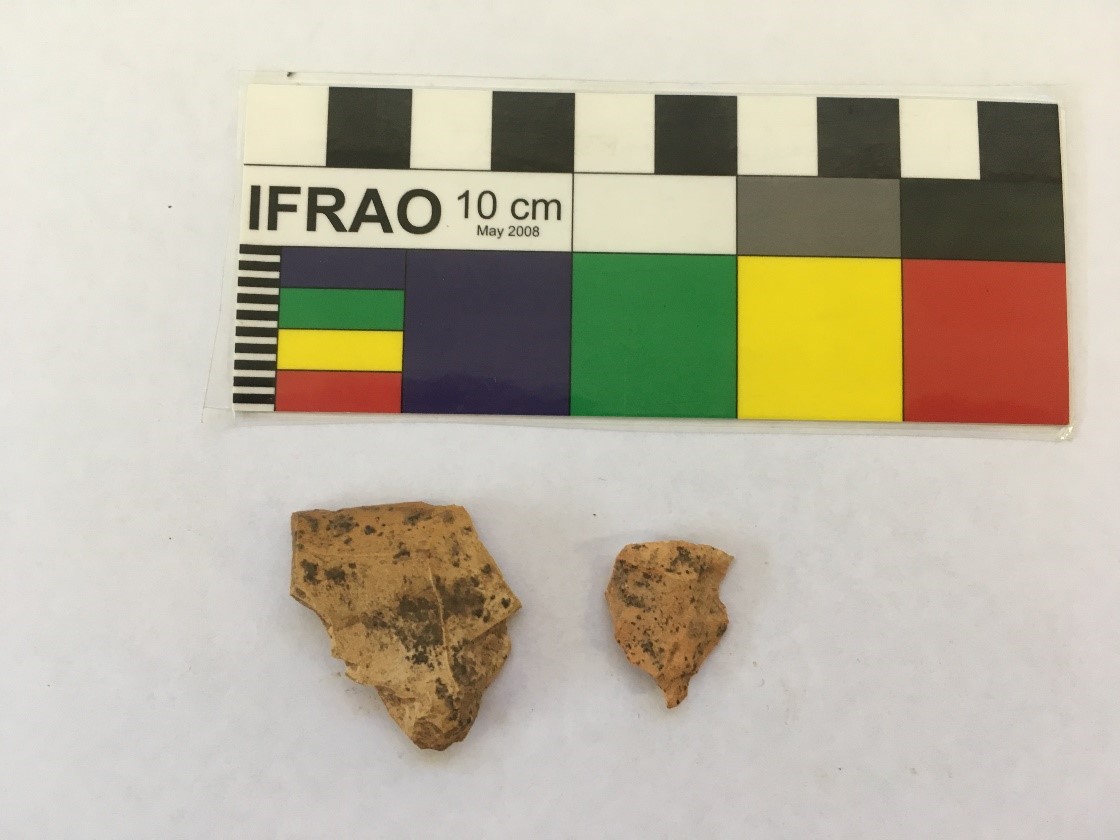 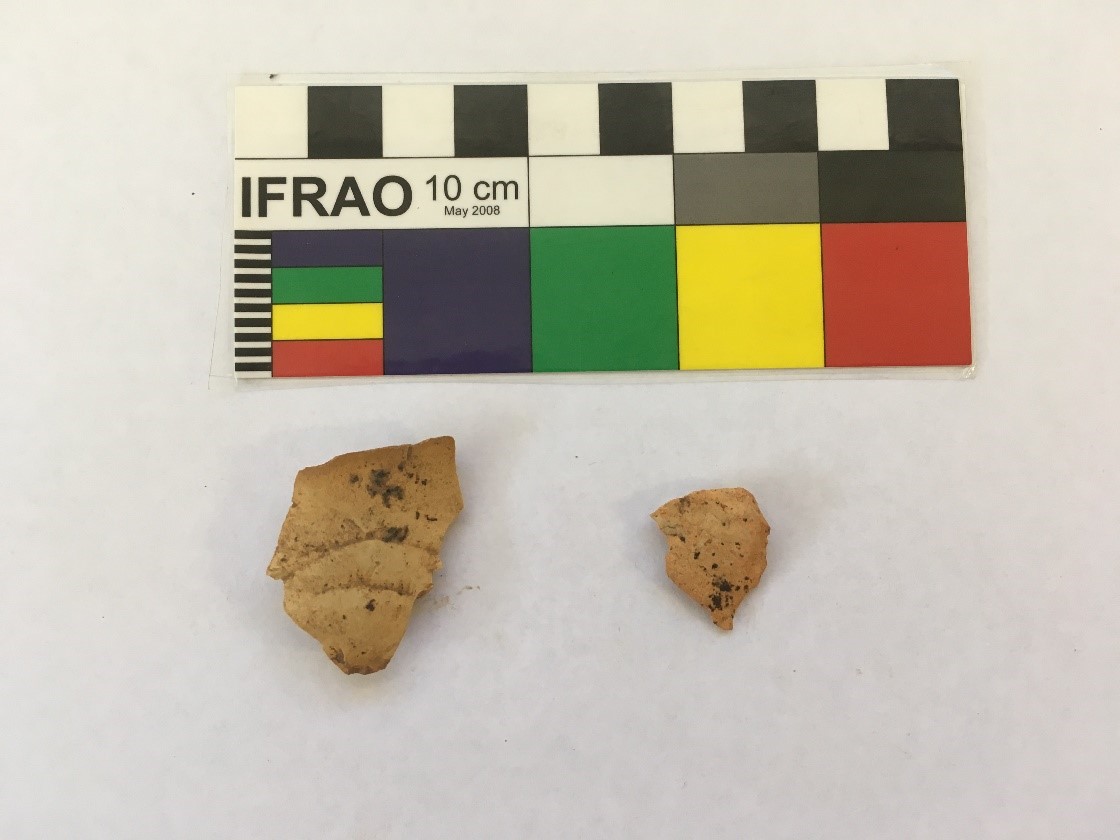 In the late 1850s Emanuel Brown took over the factory of Peter Miller & Co. in George Street, Parramatta. Miller & Co., operated on the same site as an earlier brewer, George Barton (post c1841). Following legal action and bankruptcy Brown relocated to Phillip Street, Parramatta located today between 72-76 Phillip Street. In 1875 his employees Newling and Walker purchased the business. Newling and Walkers main factory was located opposite the study site, however Walker owned property, and possibly lived on the study site at different times.

Samuel Walker purchased the corner allotment in 1877 and it is know that he lived at 93 Phillip Street (the Cannon House) in 1884-85, but this may be earlier at the sands directories only covered that area from 1884. In 1888-89 the same address was occupied by cordial maker William Smith. Walker retained an interest in the land until sold by mortgage in1896. 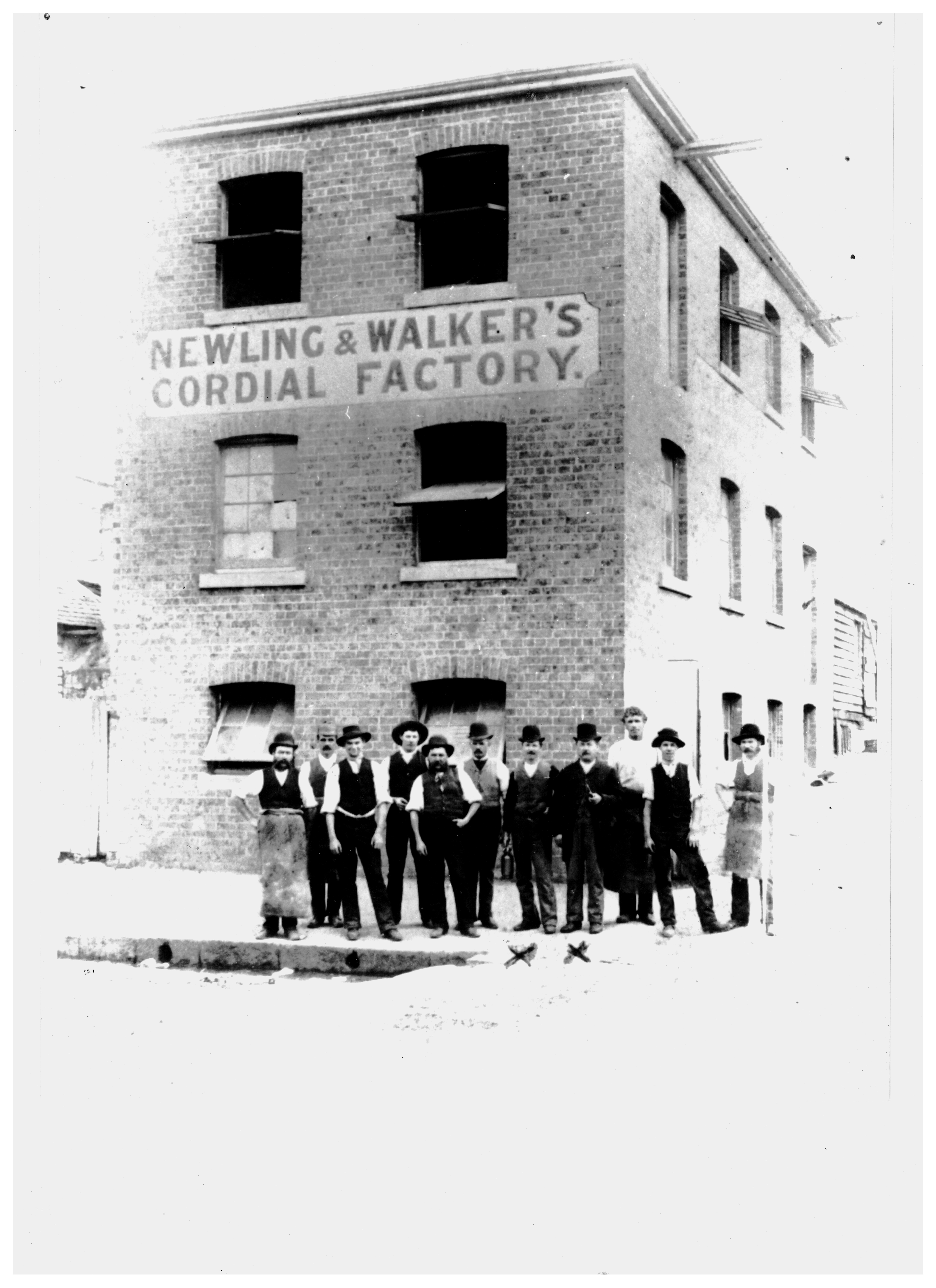 Partner Abraham Newling owned one of terraces on Smith Street, between 1883 and 1894 but is never listed in directories as the occupant.

Archaeological evidence from the Walker allotment – corner of Smith and Phillip Streets, included ginger beer bottles, in both the yard and cess pit deposits (over 20% of ceramic items). The material in the yards was derived from truncated pits and re-deposited scatters and cess pits. Also found within one of the cesspits was a large crock, also dated to this period. Ginger beer bottles either marked, or stylistically identifiable were found from every decade from the 1830s, Moreton, the ‘’1840s Potter’’, Field, Fowler, Bourne (Denby U.K.) and Field & Sons.

There was no other material related manufacturing, i.e. corks, wire etc found and it appears that the yard area was utilised for washing or storage for cordial factory opposite. 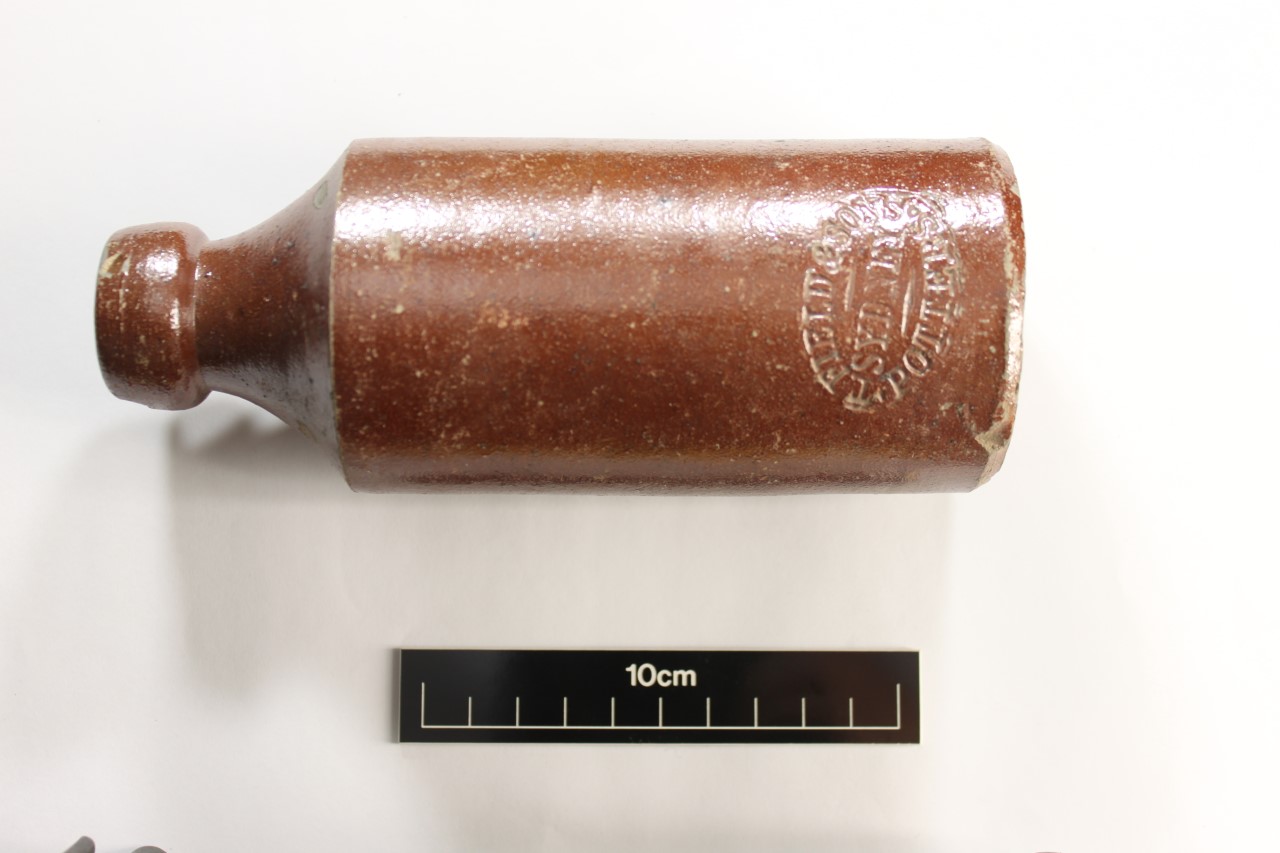 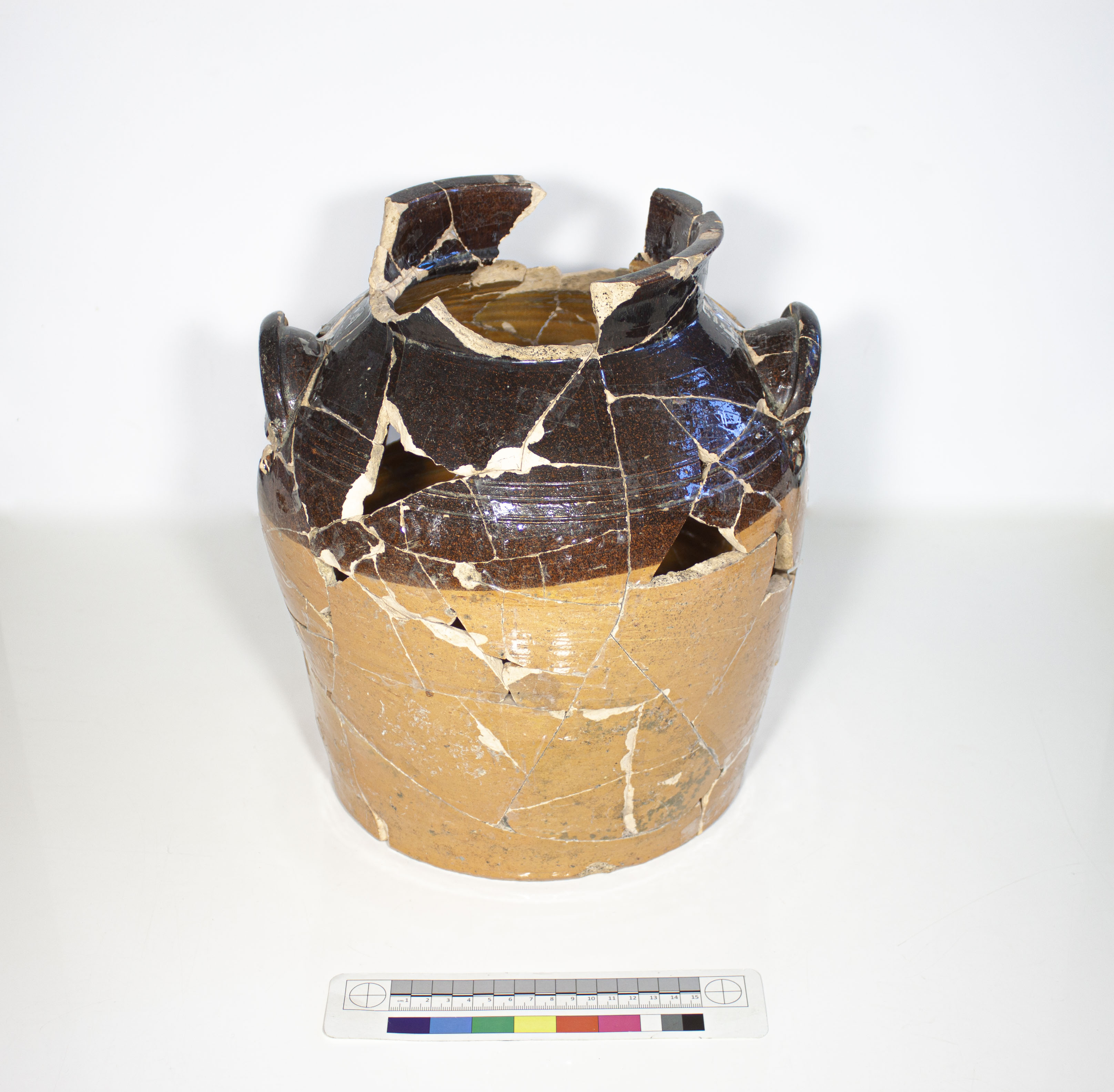 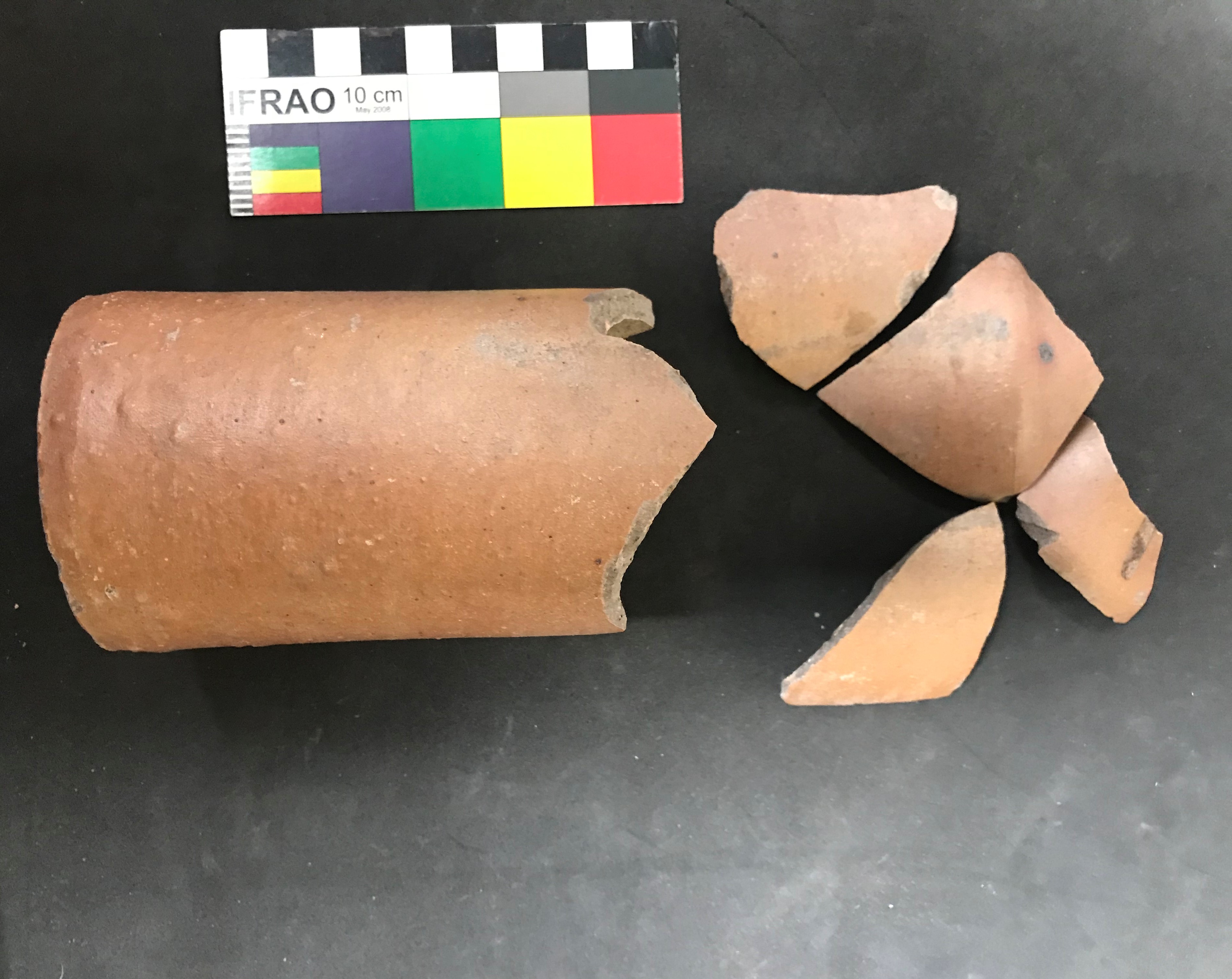 This example was made by the so-called ‘’1840s potter’’ and an example of the continuity of the Newling & Walker business since the 1840s through several hands.